I have this odd interest in being fascinated how people organize their desktop, outlook folders (ooo, they have a ‘BlogIt!’ folder!), and especially RSS feeds. A few months ago, I saw a screenshot of someone’s Google reader setup and he had tags like “technology-tier1.” His post wasn’t even his organization system, but I immediately thought it was brilliant – so I borrowed stole the idea (I honestly can’t remember who I got the idea from). It’s worked out pretty well. Here’s a snippet from the left side of my reader: 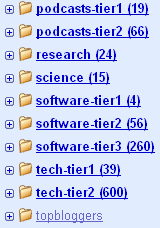 This has led me to create fuzzy heuristic such that if I really like a feed, I’ll put it in tier1 right away. If it starts to be boring, I’ll move it down a tier maybe 1-2 weeks later. If it persists, it goes even lower. Alternatively, if a blog has reasonably good content, but not fantastic, it might go into tier2. If I find myself enjoying the posts, it might eventually make the move into tier1. If a blog has the occasional gem amongst lots of noise, it might permanently remain at tier3. If it looks like no gems will ever come, it gets removed altogether.

Why use tiers? Well, I have a personalized Google home page that I probably frequently during the day since it is my, well home page. It has several reader gadgets each with one focused tag. I typically only have my tier1’s (software is the exception and has tier2 stuff on a different personalized tab). That is, I have boxes like this: 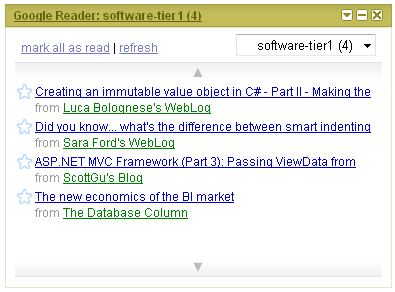 This makes it really fast access to good stuff and keep current. For tier2 and tier3 stuff, I’m forced to actually open up Google Reader (which I do much less frequently), and even then I typically just skim things and press “mark all as read” unless I see a possible gem.

Tiers are the only sane way I’ve found to keep up with the 320+ feeds I have now. Each feed made it in because it had something good on it and I like the wide coverage. It’s hard to imagine that I actually used to go to sites one by one before. RSS has really changed the way I get information.

How do you organize your feeds?