The podcast “.NET Rocks!” has a segment called “Better Know A Framework” at the start of every show. The point of the short segment is to simply raise awareness of perhaps lesser known areas of the .net framework. I’ve found that it’s a great way to learn about some things that I simply haven’t looked at before.

When Aaron Lerch asked for session proposals for the IndyCodeCamp that he and some others were organizing, I thought it’d be fun to have a “Better Know a Framework” session that had much of the same feel as the segment on the show.

In order to prepare for the talk, I went back through every segment and made a few notes on what parts of the framework was covered as well as documentation links for more information. In case that work might helpful to anyone else, I’m including it as an “appendix” to this post. 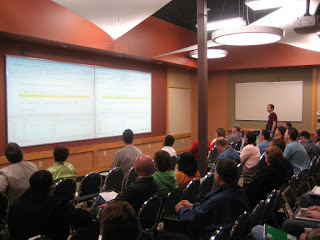 The actual talk went pretty well. There were around 30 people at the session (my session was concurrent with 3 other sessions). One of the highlights was the introduction where the hosts of .NET Rocks introduced me (via a recording). Another highlight was being able to throw out flip-flops with my company’s logo on them to people in the audience that were first to answer some of the questions I asked.

In trying keep with the code camp manifesto, I intentionally had no slides. The presentation was basically me stepping through this C# solution.

I created it to show how to use some lesser known classes and namespaces. I also briefly mentioned the “Turkey Test” and its implications on code.

Feel free to download the solution and run through it. If you couldn’t make it to the talk, feel free to ask questions via the comments. If you were able to attend the event in person, please fill out the evaluation form online or leave comments here as well.

Thanks to Aaron Lerch and many others who helped organize Indianapolis’s first code camp! It was a privilege to get the chance to speak there.

Here’s a very brief recap of every “Better Know a Framework” segment since it started. If you’d like more information about it, I included a link to the show where you can listen to it. I also linked to the MSDN documentation for what was covered. I put an asterisk (*) by the show number if I covered that topic in my demo source file.