Have you seen “The Most Famous Chart in Computer Science Education?” The exact numbers and data sources vary, but the curve always looks similar: 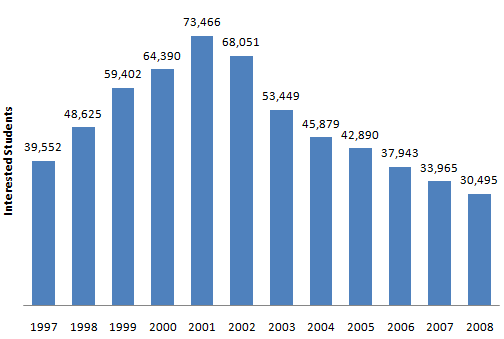 I used data from college bound seniors who indicated on their SAT that they intended to major in “Computer and Information Sciences and Support Services.” The curve tends peak between 1999 and 2001 and then you see a huge decline that has just begun to bottom out to numbers less than half their peak value.

Some people like to explain away this drop on another curve: 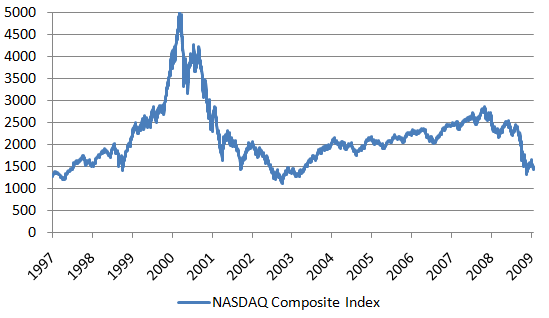 Although there was a correlation of computer science enrollment and the stock market, you’ll see that the curves diverge around 2003. A popular belief is that the bursting dot-com bubble scared some potential students, but then by 2003 parents thought most software jobs were being offshored and encouraged their kids to pick a different field.

Some jobs did go to Bangalore, but the total number of jobs actually grew in the US, even beyond their 1999 levels. There are still excellent job prospects for the long term. Even in hard times like the 1970’s recession, companies like Apple and Microsoft were founded. In 10 years, we’ll know of a several great companies that got their start in the current financial crisis. It’s unfortunate how students and their parents have been misled about the reality.

We’re faced with a pipeline problem. The fresh-outs you’ll be looking to hire in 10 years are in middle school right now. Are you doing anything to woo them to a career in computing? What do you say to a bright young girl to at least consider looking at computer science?

I could start with my story. As a kid, I was captivated by how I could think of an idea for a program and then have a computer execute it exactly. It was as if I could put part of my mind inside the computer. My parents and friends thought this was magic. It was magic, but it was a magic I could understand. There’s always cool new things being computed. It was magical to see how Deep Blue beat Kasparov long before I began to understand the beauty of how it worked. Every day I listen to MP3s that were created by a compression algorithm that gets rid of sound that my ear can’t hear. Companies like Walmart sift terabytes of data to predict market demand so they can send extra strawberry Pop-Tarts when hurricanes are approaching. On a personal level, new algorithms predict with a high accuracy what types of movies we’ll like. But that’s just one tiny sliver of what’s out there. Each person can have their own unique experience. There’s a lot of great computing going on and the demand is only increasing.

Sometimes you’ll hear honest hesitations about a career in computing because of fears that they’ll “sit in front of a computer all day.” The sad irony is that this thinking causes people to go into fields like accounting, graphic design, marketing, or hundreds of other fields where they spend just as much time in front of a computer. The difference is that they’ll spend most of their time using applications like Outlook, Word, or Excel and often have less fun than the software developers that are creating these programs. Moreover, working in the computing fields will give someone a chance to create future interfaces that don’t have everyone in front of giant screens all day.

This isn’t to say that there aren’t boring software development jobs, but there are also plenty of great jobs. It’s a great career. I sometime feel a little guilty that I can work in a field that I enjoy. As a field, we create software that powers business communications and connects you with friends. Software will be a pivotal role in gene sequencing and analyzing that will usher in customized medical treatments and drugs. Software will drive many great innovations of the future.

It’s sad that kids aren’t even given a chance to see the breadth and excitement of our field. I don’t blame them. On the whole, we’re doing a terrible job broadcasting our image.

Professors often teach computer science as if it is some sterile thing with nothing new in it. This is just not true; we’re in our adolescence. Sure, we bumble around and do silly things at times, but it also means we’re growing. We’re in an incredible time. Mehran Sahami captured this well at the conclusion of his intro class at Stanford:

“Think about the time that you’re living in. Don Knuth, who is considered the father of Computer Science is still alive and he’s in this department. It’s sort of like you’re geometers and you’re living in the time of Euclid… It’s all happening now. Don’t think of this stuff as dead people who did this stuff and it just happened and now you’re forced to do it. You’re living in it.”

When I’ve had the honor of having conversations with computing pioneers like Alan Kay, I often hear how their teachers in the 60’s would admit that they didn’t understand the full possibilities of computing, and they wanted their students do better. The early ARPA community with J.C.R. Licklider at the helm is a great example of this style.

Licklider encouraged and funded wild and imaginative ideas that caused a huge boom in computer science back in the 60’s and early 70’s. Unfortunately, this slowed down in the 1980s as funders became more conservative, took fewer risks, and as a result got more incremental improvements rather than something big. I think this is why Alan Kay has difficulty finding significant new inventions in computing since 1980. Alan’s statement sounds crazy until you see just how much of what we use was started before 1980. Some will point to the web and the browser as a huge new invention, but even Marc Andreessen, speaking on how he was able to create the first graphical web browser revealed:

“I was able to do it so quickly because it was the icing on the cake that had been baking for 30 years.”

Indeed he had. In the mid-60’s, some of the baking started when Licklider funded Doug Englebart’s amazing oN-Line System that amazingly had hypertext links and was operated by a mouse. Len Kleinrock’s Ph.D. proposal on packet theory in 1961 gave him a great start that ultimately led to his team sending the first message over ARPAnet in 1969. Vint Cerf and Bob Kahn had already published a paper on TCP/IP, the bedrock of the Internet protocols, by 1974. All of these technologies were well refined and in production by the time Tim Berners-Lee created HTTP in the early 90’s to which Andreessen would add a graphical front end.

Are we willing to fund long-term “wild” and “crazy” ideas today to create Internet-sized future results? We’ve been too focused on short term results. It’s not just academia; most companies focus on short-terms results that dismiss the fact that computing is a young field and miss what really matters:

“Many HR departments haven’t figured this out yet, but in reality, It’s less important to know Java, Ruby, .NET, or the iPhone SDK. There’s always going to be a new technology or a new version of an existing technology to be learned. The technology itself isn’t as important; it’s the constant learning that counts.” - Pragmatic Thinking and Learning, p.145

Last March, I was given the opportunity to be on a design team to start tackling some of these problems. We knew that we couldn’t change the whole field and that some people would want to keep it the way it is. But we also knew that we had to do something; we didn’t want to settle for the status quo.

Our primary task was to plan a “summit” of the best people from academia, government, and industry and get them all in one room so that we could get a good sample of the entire field. We didn’t want to let people have the chance to point fingers outside and say it was somebody else’s problem.

After working on the basic concept for the summit, we needed to give it a name. I had enjoyed many side discussions of the great days of Licklider, PARC, and the early culture that accomplished great things. Sort of as a joke, I thought that we needed to “reboot” computer science to get rid of the cruft that had accumulated over time and get back to the excitement when the field was brand new. After some discussion, we decided to change “computer science” to a broader field of “computing” and use the “magic and beauty” of computer science to be the driver of the “rebooting.”

Only later would I realize the rebooting metaphor could be stretched a bit further. We can “reboot” the field without throwing away the good parts just as an operating system can reboot and depend on its valuable non-volatile memory being preserved. Rebooting doesn’t mean that we’ll go down the same crufty path (e.g. perhaps we have better “drivers” now). Most importantly, the domain name was available so we ran with it.

After nine months of planning and inviting over 220 people, we had our summit in January at the Computer History Museum. It was the first time that such a broad representation of the computing field came to work together in the same room.

The summit was guided by the Appreciative Inquiry process. It’s a technique that has you work in small teams to discover a positive core of what’s giving the field life and then uses that to start dreaming of a better future. As the three days unraveled, we made it to the “design” phase where we kicked off several projects that fell into three rough categories:

I joined the Computing Field Guide team. I think it’ll be fun to see if we can come up with a way to leverage many of the great existing resources out there and learn some of the breadth of the field as a result. 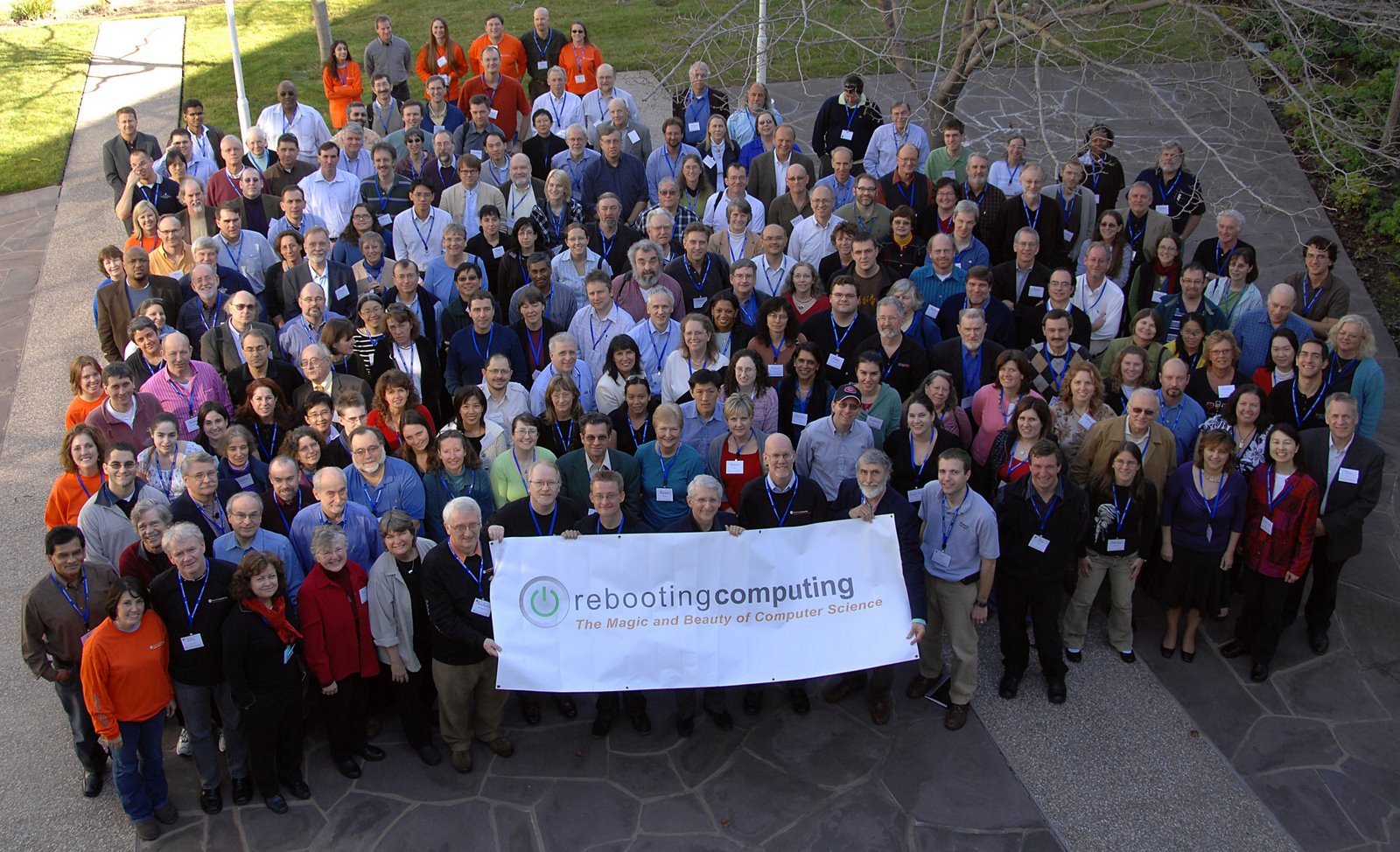 In the end, the three day summit was just the beginning of a long journey. It was a bit chaotic and some were disappointed we didn’t fix everything right then or do more, but I think the summit gave a good context for the issues our field faces. My best memories include all of the great people that I met and being able to engage in some great conversations.

Steve Jobs said “you can’t connect the dots looking forward; you can only connect them looking backwards.” I think that holds true for this summit. There are still a lot of dots between here and there; wherever “there” might be. With a lot of hard work, I’m confident that the dots will connect somehow. There’s an interesting road ahead and I want to be a part of it. We need to start baking cakes for future generations to ice.

What do you think of the current state of computer science? What is your dream for the future? What are some things that we can start now to improve the current situation? Are you involved with any existing effort? Would you like to join ours?

I’d love to hear your thoughts.

P.S. There are several blog posts by fellow “Rebooters” ([1] [2] [3] [4] [5] [6] [7] [8] [9]). There are some pictures on flickr and a Rebooting Computing Community site that’s starting to have follow-on discussion and might eventually have videos of highlights from the summit. In addition, you might watch this great talk by Dr. Peter Denning who has been leading this effort for over five years.