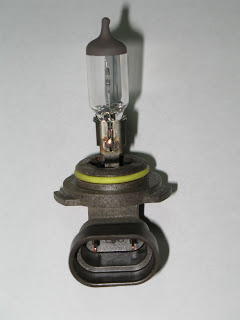 Recently I discovered that my passenger low-beam headlight burnt out. More accurately, the nice police officer who pulled me over and only gave me a verbal warning let me know it had burnt out. With this new knowledge, I went to the local auto parts store to find a new one.

I uninstalled the broken one and brought it in with me. On the bottom of it, there was a “9006” identifier. The lady at the store helped me find another “9006” low beam headlight and it took about a minute to install.

It sort of reminds me of how relatively simple COM is at its core.

For the past decade, the sum of all of my knowledge about COM was approximately:

You probably knew more than that, but that’s probably what I would have squeaked out if push came to shove. In my life, I never really had to really understand COM at all, so I didn’t even bother.

Recently, I had to break down and actually learn enough about it to get some things done. I learned that it’s really not that bad. Please consider this as the absolute minimum that a Windows programmer should know about COM. I wish I had, it would have made things faster to learn.

The first thing to learn is that there are three major figures in COM:

A server is something that wants to do some tasks for you. He’s the guy that the client is pushing around. He only does a few tasks that are on a menu that the client knows about.

The bee “hive” is buzzing with activity. Imagine a bee keeper that stores all of his notes on the individual “cells” of a honey comb. It’s sort of like a big telephone directory, but one that was designed by someone who hates bees.

Now that we know the key players, let’s get back to our light bulb. Imagine that all you had in the world were the three major players above. What would have need to have happened?

Well, the server in this case would be a light bulb. Wanting to copy Apple’s naming convention, let’s call him iLight, or more boringly: ILight. Now ILight had to advertise himself to the world. The menu of things that the client can request him to do include “Turn On” and “Turn Off” and maybe “CalculateWattage.” He has a boring part number just like my real light did (e.g. 9006). Let’s say that he walked over to the hive and wrote down in the directory that “ILight is part #9006” and also wrote down exactly where in the store to find him. The only real requirement is that this must happen before any clients can use him.

The client is just like me and knows he needs something that can “Turn On,” “Turn Off,” and “CalculateWattage.” He looks in his car manual and finds out he needs an ILight. He goes to Hive and finds that “ILight” is part number “9006.” Next, he goes to the “cell” where information on part “9006” is stored and finds exactly where to find it. He picks up the ILight and lives happily ever after.

See? Not too hard right? At a high level, it’s pretty simple. For fun, let’s dive deeper into the reality that is COM. 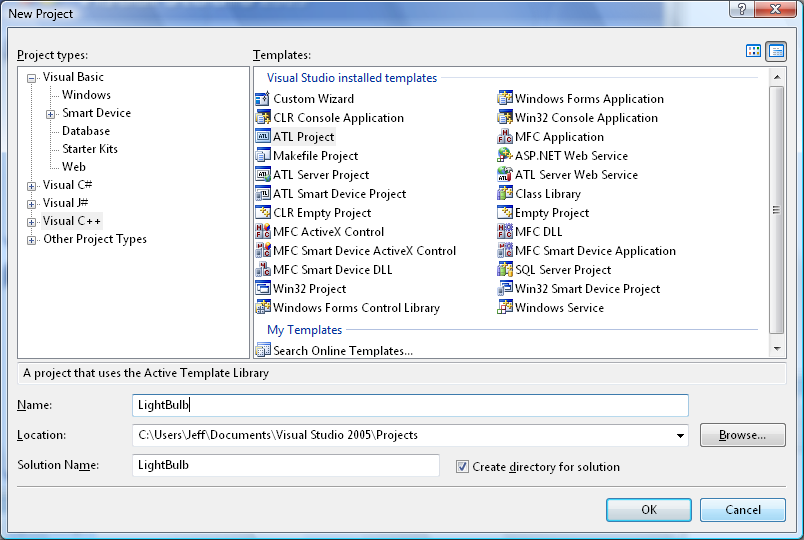 “ILight” would more than likely have started his life in Visual Studio as an ATL (ActiveX Template Library) project. ATL is just a simple way of dealing with the gooey parts of COM that don’t really matter that much. ATL projects are written in C++, so they’re sure to bring fond memories of your college days back. 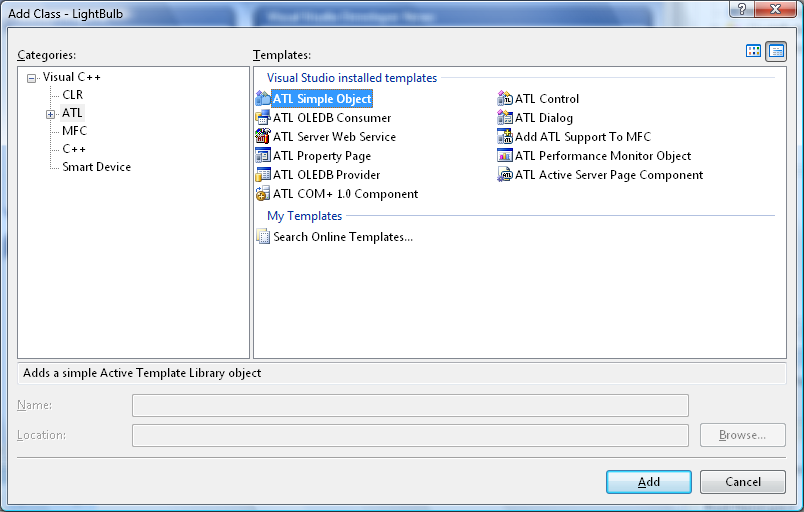 And give it a name of “Light” and have the wizard automatically fill in the details: 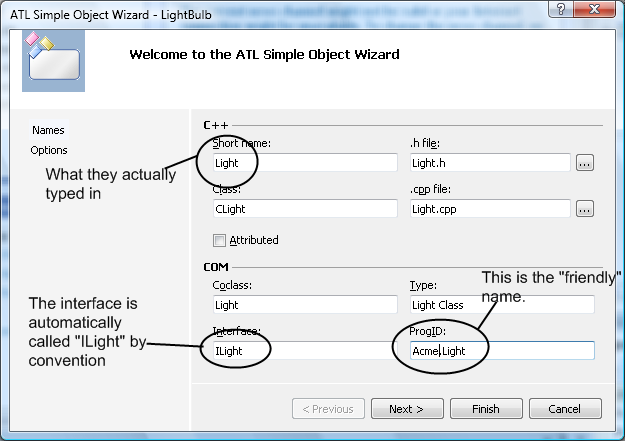 It doesn’t matter if we get scared after clicking next, we just need to hit finish and trust the defaults (remember, this is the absolute minimum you should know): 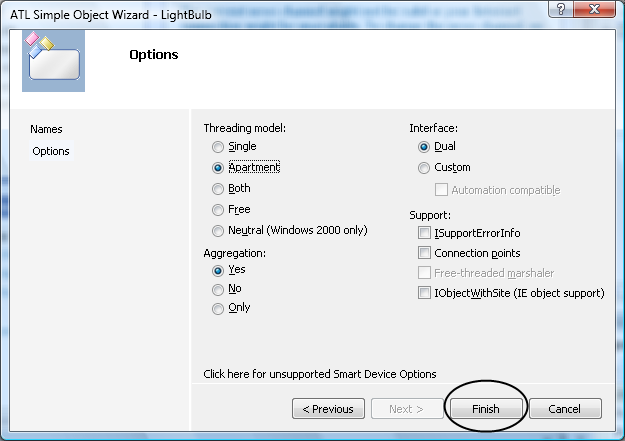 Next, go to the class view window on the right hand side of their screen and right click on the “ILight” interface and add a few methods: 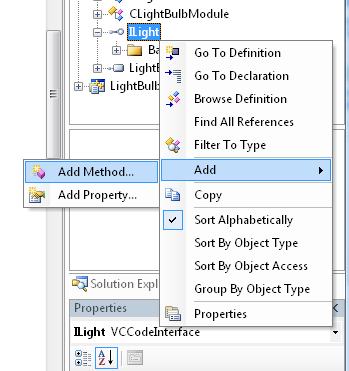 The first method being “TurnOn” (and similarly turn-off) that has no arguments: 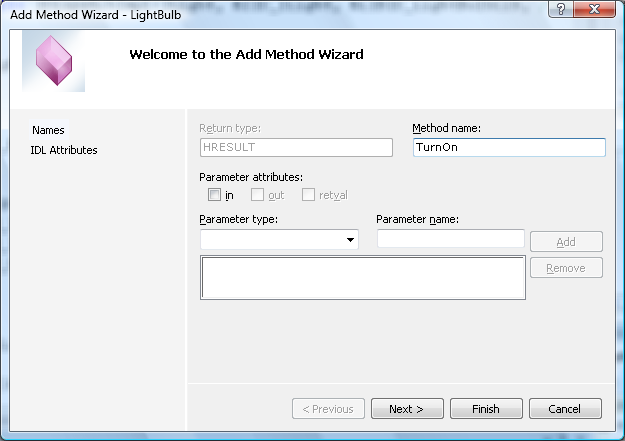 To make it interesting, let’s say there was one more method called “CalculateWattage” that takes two parameters (volts and amps) and returns the wattage: 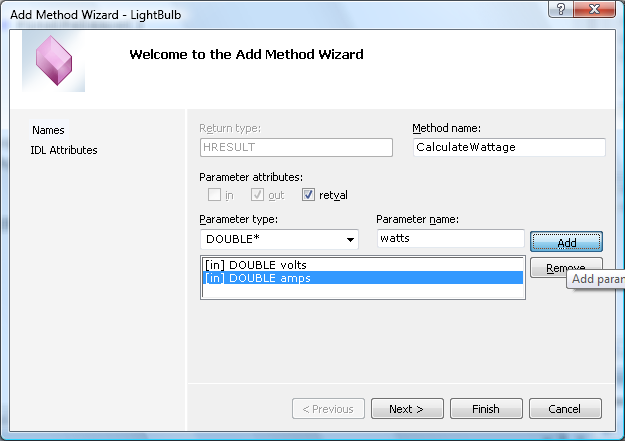 Now, one would go to the Light.cpp and fill in the definition of these functions. In this example, we’ll just show a message box for the turn on/turn off commands. Note that for the “CalculateWattage” function, we return the result via a parameter pointer. This is important since the return value for COM methods is almost always the status of whether it succeed or not. Successful responses always start with “S” and errors always start with “E”. The COM-ese for this is the “HRESULT” that you can think of as “here’s the result of the function call.”

If you actually spent your time in C++ as a client, you’d have to make calls like this:

You can’t simply check a value to be equal to something since any result that starts with “E_” is a failure (popular ones include E_FAIL and E_NOINTERFACE). The “FAILED” macro just checks to see if the most significant bit is set.

Now, when going to build the project on Vista, a curious error is reported:

What happened? Well, answering that will take us back to the hive.

When we created the ILight interface and its concrete implementation, Visual Studio automatically created a “part number” for us that is a really huge number called a Globally Unique Identifier (GUID). The number is so big that it makes us yearn for the days of simple part numbers like 9006. In order for clients to be able to find our component, they need to look up our part number or our name in a special area in the registry/hive. Specifically, the servers need to put their details under the hive key (HKEY) that is the root of all classes/servers. This is conveniently called “HKEY_CLASSES_ROOT”:

But we don’t want just anyone being able to write there right? If any ol’ server could just write into that area, they could replace a good implementation of ILight with one that say, recorded all your keystrokes and sent them to some COM-enlightened hacker several timezones away. This is just one of the reasons why setup programs require a User Account Control (UAC) elevation before they will start. Microsoft is guessing that setup will probably want to register some COM server or write to a directory that the standard user doesn’t have permission to write to (e.g. “C:\Program Files”), and gets it out of the way early.

When you go to build the project, Visual Studio will create a helper batch file for you in your project’s debug directory and run it. If you use a tool like Process Monitor, you can see all of this happening:

If you’re really quick, you’ll be able to copy the batch file before Visual Studio deletes it after it gets an error. Here’s what the batch file looks like:

All that the batch file does is call out to “regsvr32,” which clearly stands for “register 32 bit COM server.” I say that a little tounge-in-cheek because I had seen the “regsvr32” name hundreds of times before and never really understood what a server meant. “What’s a server?!” However, in hindsight, it’s quite simple. It’s just a COM class that can do work.

When regsvr32 goes to write into the HKEY_CLASSES_ROOT area (abbreviated HKCR), it gets denied: 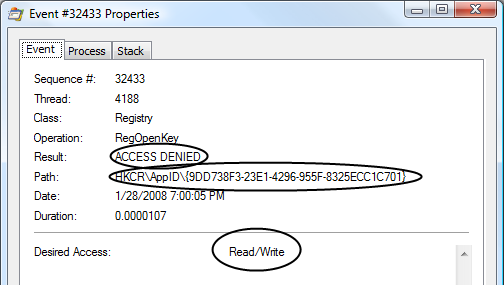 Note that the text after the “VCReportError” label in the batch file is exactly what was reported to us in Visual Studio’s error window.

What are we to do now? Well, the simple answer is to run Visual Studio again, but this time with administrator privileges and try it again:

Now, our component is registered. To learn exactly what this means, we need to use another tool called “OLE-COM Object Viewer” (oleview.exe) that’s part of the Windows SDK. OleView simply lets you see all of the components/servers that are registered on your machine. It’s like browsing an auto parts store. If we search for our “Light” component, we’ll see a screen like this:

Which is full of all sorts of great information about our Light pulled from many different areas of the hive. For example, it says that our light class implements the ILight interface that has the interface identifier of “BBABC3ED-E2B6-4023-AE58-1B04E80E0DAE” and the concrete class has a part number/class identifier of “98C0E3FF-264C-4919-8DE6-F4D87B83D779.” Furthermore, the location in the “store” is on the file system at “C:\Users\Jeff.Moser\Documents\Visual Studio 2005\Projects\LightBulb\LightBulb\Debug\LightBulb.dll”. The class has a version specific name of “Acme.Light.1”, and it also goes by the version non-specific name of “Acme.Light”.

Impressive! It’s a little more complicated than the auto parts store, but not that much. The hive is buzzing with information about how to find our component and what it provides.

Now, let’s jump over to client land. The client can be anything that supports COM. For example, VBA in Excel. We can either add a reference to it by clicking Tools*References: 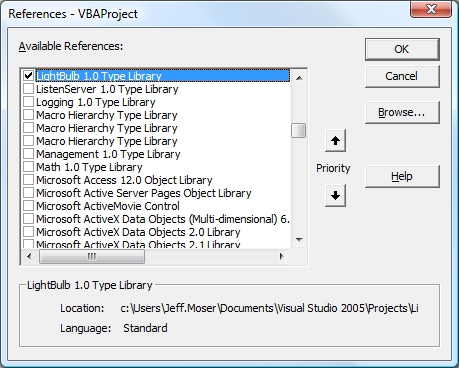 and then write some VBA code to use it:

Note that we can do the exact same code in C# in a similar way:

Neat huh? Note that we didn’t have to check for HRESULTs like we would have done in C++. The reason is that under the covers, the VBA runtime (and C# .NET Runtime Callable Wrapper and CLR) do that for you. If the function returns an error, an exception is generated so that you can’t ignore it.

Another nice feature is that we can take advantage of the fact that the hive can retrieve information about our class just by its string name (ProgID). The following code has the same result for the CalculateWattage call:

We can do the same thing in C#, but the syntax will be little messier until C# 4.0’s support for dynamic lookup is available:

It’s the exact same idea, but we get less language support.

So that is what COM is all about. Well, that’s what I would say is an absolute minimum to get by without assuming things are just magic. I left out a few details that aren’t 100% necessary to know:

COM is a necessary layer due to the binary incompatibility problems. Since we now have .NET, when you look back at COM, it’s sort of like your grandparents telling you how they washed clothes without electricity. It was a bit more involved and tedious, but it got the job done. COM started in the early 90’s, well before Java and the CLR with its unified type system. Since many of the core classes/servers of Windows and Microsoft Office use COM, it will be around for a long, long, long time.

It’s good that I finally understand it enough to make use of it effectively!

How did you learn about COM?